Academy-Town Offices, 503 Province Road, 127-001-000-000, Pictures, Postcards
Gilmanton residents want town hall entrance unlocked  01/04/2019 Union Leader
Selectmen's Press Release re:Locked Doors  08/06/2018
Time to unlock the front door to Gilmanton's town offices  06/06/2018 Laconia Daily Sun
Gilmanton selectmen: Town hall closed by overwhelming response to political sign controversy  03/09/2018 Union Leader
Why the security concern at Gilmanton Academy building?  03/02/2018 Laconia Daily Sun
Marble-faced clock is Gilmanton treasure  01/22/2018  Union Leader
Painters freshen up Gilmanton town office building  Concord Monitor 9/20/2017
2015 Damages from burst pipe
WMUR Video
WMUR Articles
YouTube
Town Office/Building Use Study 1987
Gilmanton Academy was incorporated in 1794, "...one of the three academies first founded in the state...". In 1808 the original building burned; the second building also burned, in 1894, and was replaced with the current building, which now houses the town offices. Gilmanton Theological Seminary was provided for by the terms of the original charter of Gilmanton Academy. Rev. Heman Rood, from New Milford, Connecticut, was the first professor in 1835. By 1841 a large, three-story brick building designed by Ammi B. Young was completed for the seminary's use. Wikipedia  More...
The Fire Between the Fires A brief history of Gilmanton, New Hampshire, Academy - Ehrensperger, Harold, Author -  1973 - a history of the life and devasting fires of the Gilmanton Academy, 17 pages
Gilmanton Theological Seminary The NH Repository, Rev William Cogswell, July, 1846
Corners Library, 503 Province Road, 127-001-000-000
Email your book, CD or DVD request to Gilmanton Library  02/17/2021 Laconia Daily Sun
Gilmanton Corner Library to start indoor book sale  07/18/2020 Laconia Daily Sun
Corner Library is a Gilmanton "Gem" hiding in plain sight  03/29/2019 Laconia Daily Sun
Library - Interior Renovations-2016
100 Years  Concord Monitor 07/04/2012
Kelley's Corner School, 12 Sanborn Hill Road, 426-034-000-000
The Kelley's Corner School, was listed on the New Hampshire State Register of Historic Places on April 28, 2008.  It is the last of the many one-room schoolhouses in Gilmanton to remain in public ownership. Authorized in 1778, this one-room school house served the community as a school for more than 100 years. It is still used as a community building, holding an important place in the social life of the community, and is a sole survivor of this building type in the town of Gilmanton.The Gilmanton School Board closed the Kelley's Corner School at the end of the 1939-1940 school year, as well as three other one-room schools that were still in use at that time; the Smith Meeting House School, the Gale School, and the Potter School. For the 1940-1941 school year, Gilmanton's elementary schools were consolidated into two facilities, one at the Corners in the Academy building, and one at the Iron Works.

Kelley Corner School House receives 2020 Moose Plate Grant  01/07/2021 Laconia Daily Sun
Renewed push to preserve a one-room schoolhouse in Gilmanton  12/28/2020 Concord Monitor
Interior 06/15/20 Facebook
Finding a New Life for the Kelley Corner School - 05/15/2019 NH Magazine
Kelley Corner School Restoration Project - April 2017-October 2018
Dinner supports school repairs  09/29/2016 Concord Monitor
Gilmanton receives letter and photos from 1938-40 teacher at one-room Kelley's Corner School  12/22/2009 Daily Sun
Odd Fellows Hall/Old Town Hall, 1800 NH Rt 140, 115-042-000-000, Pictures
The Odd Fellows Hall/Old Town Hall was listed on the New Hampshire State Register of Historic Places on January 24, 2011. Constructed in 1902-03 for Highland Lodge #33, this all-wood building with a Second Empire tower had space on the second floor for the local Grange. It is one of only two buildings to survive the 1915 fire that gutted the village, and has been in continuous use as a town gathering space and voting station for more than 100 years.

LCHIP awards $75K grant to Old Town Hall  Union Leader 12/15/2021
Please support restoration work on Gilmanton's Old Town Hall Laconia Daily Sun 03/05/2020
Condition Assessment Report of December 10, 2019
Condition Assessment & Recommendations of November 6, 2019
Report of December 10, 2018
Benefit Concert held at Old Town Hall 05/27/2017
Report of October 4, 2010
Town Office/Building Use Study 1987
Town Poor Farms
273 Meetinghouse Road, Tax Lot 419-028-000-000
Town Farm Road, Tax Lot 420-073-000-000 Plan & Tax Map
From its earliest settlements New Hampshire has struggled with issues surrounding the treatment of its poor. The early Northeastern colonies followed the lead of England's 1601 Poor Law, which imposed compulsory taxes for maintenance of the poor but made no distinction between the "vagrant, vicious poor" and the helpless, and honest poor. This confusion persisted for generations and led directly to establishment in most of the state's towns of alms houses and poor farms and, later, county institutions which would collectively come to form a dark chapter in New Hampshire history. Poor Houses and Town Farms: The Hard Row for Paupers-Steve Taylor
What if the poor were sent to work on town-owned farms? They were and it wasn't pretty  07/23/2016 Concord Monitor
Unity Almshouse  Sara Poisson 2009 Silent Voices From the Past  Sara Poisson 2010


Crystal Lake (aka Lougee Pond)
Ice Disk WMUR YouTube 02/2019
Lake Drawdown 09/28/2018 Laconia Daily Sun
Frisky Hill
Frisky Hill is on ProvinceRoad, and runs from Loon Pond Road to Smith Meetinghouse Road.  It is well known for its beautiful view over Loon Pond.  It was previously the site of a small cemetery.  When the State widened the road, the occupants of the cemetery were relocated to the Smith Meetinghouse Cemetery.
The Fight For Frisky Hill  NPR 8/17/2013
Priceless Views  Concord Monitor 9/16/2012
GIW Blacksmith Shop
GIW Blacksmith Shop  One day prior (1930's?) to being burned by the Town Courtesy/Comment John Carter
GIW 1780 Blacksmith Shop, Oldest Blacksmith Shop in New England  1923 Leslie Jones Photo
GIW 1780 Blacksmith Shop  Postcard
Manning Lake (aka Youngs Pond)
Mary Butler Homestead
The site of the Mary Butler Homestead is located on the Class VI portion of Mary Butler Lane in Gilmanton Corners.  Mary Butler Eastman gained fame as a result of her ride from her wilderness home in Gilmanton to Cambridge to learn the fate of her husband after the Battle of Bunker Hill.  Much has been reported of the feat and the strength and devotion evidenced also was celebrated in poem and illustration.  Mary Butler Eastman and her husband, Lt. Ebenezer Eastman, are buried in Copp Cemetery on Province Road.  The site is under the care of the Cemetery Trustees.
History 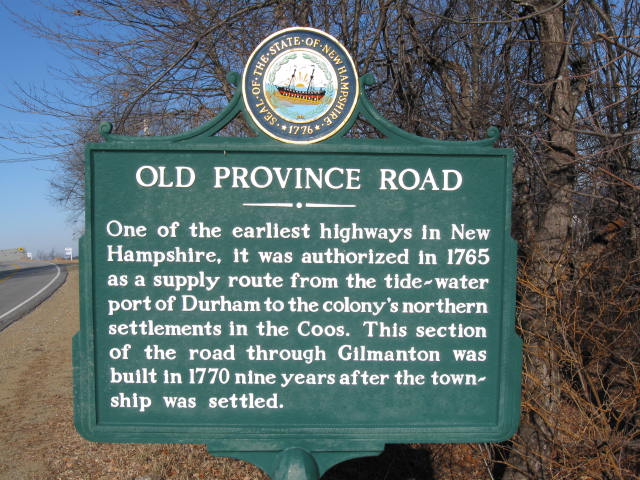 
NH Register of Historic Places
Kelley's Corner School House
Odd Fellows Hall/Old Town Hall
Round Pond
Sawyer Lake (aka Factory Reservoir)
Sawyer Lake District
Sawyer Lake Composite Plan
Shellcamp
Shellcamp Pond was thus named by certain hunters, who, in the winter of 1749 and 1750, ventured into this wilderness with their guns, traps, and fishing apparatus, and encamped for the winter on the Western shore of this Pond. They found a large, hollow, pine tree fallen in a favorable position for a shelter, and in this shell of a tree, they made their camp during their stay. It was ever after called by them Shellcamp Pond.  The History of Gilmanton 1845
2019 Lake Drawdown  01/05/2019 Laconia Daily Sun
Aerial View  Bruce Atkinson 08/17/2020
Town Pound - 413-019-000-000  Pictures
The Cemetery Trustees manage the Town Pound site.  There is no formal historic designation of the Pound.
Local lore tells us that the men who moved some of the extremely large granite and boulders to the site by hand with oxen and horses chiseled their initials into places on the walls. Certainly, several such initials can still be found today.
The Town regularly elected a Keeper of the Pound and the last known person to hold that position was Earl Ellsworth. 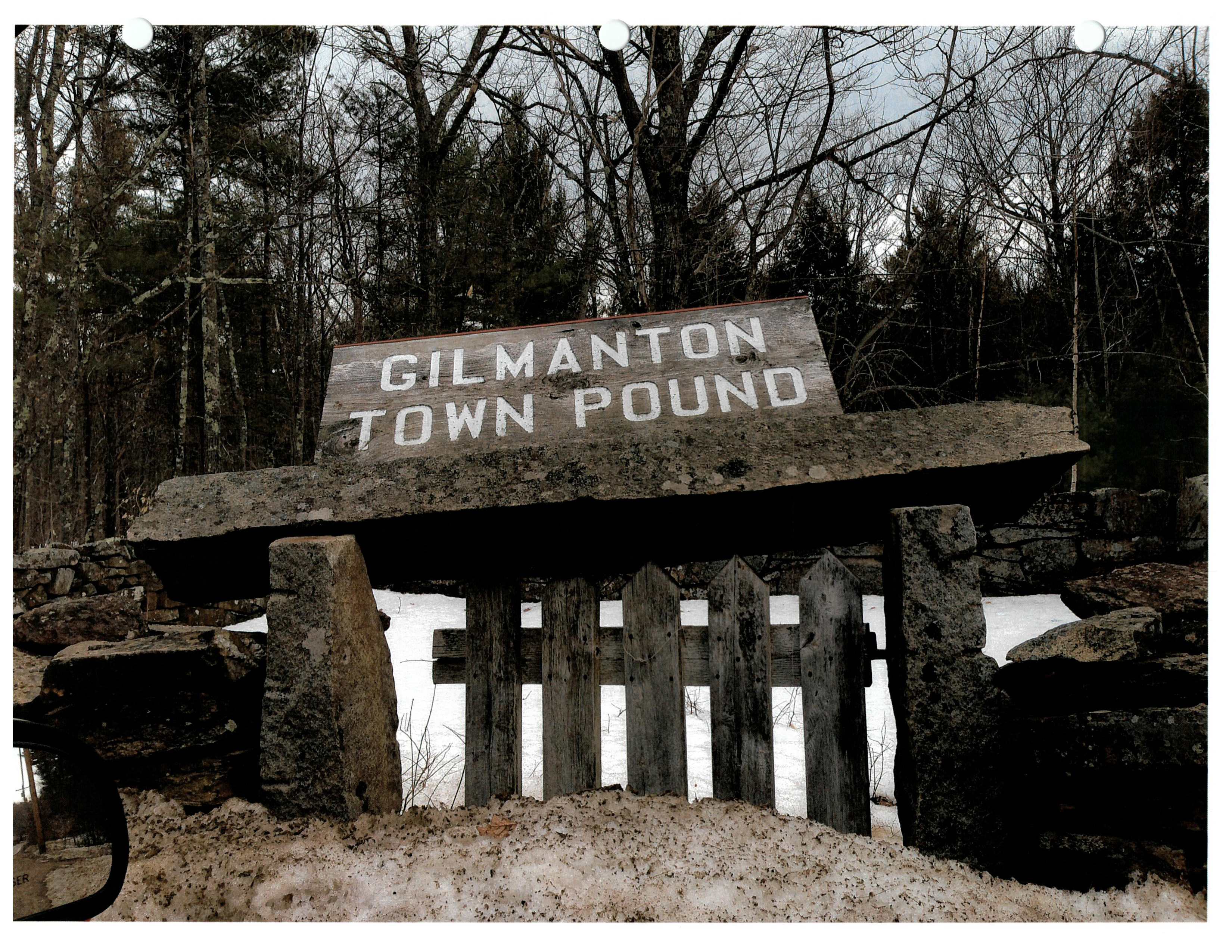 2014 - During the winter of 2014, a large granite stone supporting the entry-way capstone was partially dislodged by NH DOT plowing activities. This was speedily repaired by DOT in April, 2015.

1807 - the Town authorized the Selectmen to rebuild the Pound and to build it of stone. The location was changed and the new Pound was placed a little Southward of William Peaslee's, where it now stands.  News

1783 - the Town first authorized the Selectmen to build "a pound" on the school lot, near the Congregational Meeting House.  Origin of the Gilmanton Pound, Richard Arms as excepts from the Gilmanton History